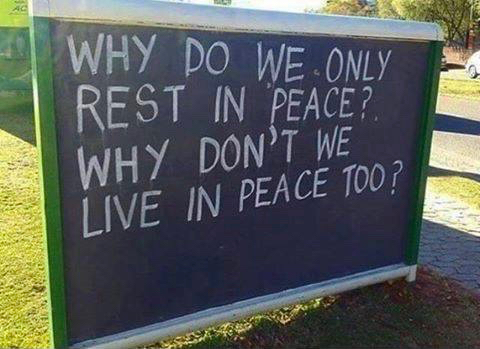 Live in Peace. Live in Now.

More is not always better.

I thought about just leaving it at that for this post. But somehow to do so seemed like a copout. Why is that? Certainly it could have punctuated the message. It was earlier this year that I realised that this is the message I’d give my 20-something self. Just because one plate of food was awesome doesn’t mean that two is better: I’d probably just end up being stuffed and uncomfortable. One drink was very enjoyable; two won’t necessarily make me feel twice as good. One long run in the woods was divine; and given my current level of fitness, another one won’t necessarily leave me feeling doubly fulfilled. …You get the idea.

What lies behind the incessant drive for more??? Oj, exploring that feels like a deep rabbit hole. But I have to wonder if it’s not an attempt to fill a hole inside, in my life, in my psyche, in my heart, or in my soul. The perception is that I’m not already whole.

Hmm. Well that’s simple enough to grasp intellectually, and perhaps not too much of a stretch to experience for a split second, but to actually live with the knowing that I’m whole. Well, that’s a completely different animal, at least for me at this time in my life.

Hmm, again. Yet the saints and sages also say that it’s just that simple.

So why didn’t I leave well enough alone with the first sentence? Because although more is not always better, not enough can also be as lacking in truth. Had I not looked beyond the first sentence I would not have experienced this inquiry.