Close friends and family know that I’m a much happier person, and a great deal more pleasant to be around, after I’ve exercised. This is especially true following longer duration sessions, whether that be biking, running, swimming, or downhill skiing.

The reason for the increase in affability is multifold. In her book, “Joy of Movement”, Kelly McGonigal does a science-based deep dive into the health-enhancing and life-extending benefits of exercise and movement. The underlying mechanisms may surprise you, they did me. Without question, exercise helps create happiness, meaning, and connection!

❝ McGonigal draws on insights from neuroscience, psychology, anthropology, and evolutionary biology, as well as memoirs, ethnographies, and philosophers. She shows how movement is intertwined with some of the most basic human joys, including self-expression, social connection, and mastery–and why it is a powerful antidote to the modern epidemics of depression, anxiety, and loneliness.❞

For those of us who are dependent on movement, it’s a good thing! Diabetics are dependent on insulin. We all are dependent on breathing and sleeping. When we become dependent on exercise it also enhances our ability to pursue other goals and to be a version of ourselves in relationships that we are proud to be, and that’s different from addictions.

Being outdoors provides time in nature. The sights, sounds and energy are soothing for me. I also listen to podcasts and books thereby providing many hours of learning in a myriad of subjects. Recently, I enjoyed a podcast with Simon Ward interviewing Stephen Seiler PhD—the person attributed with introducing the concept of Polarised Training. If you exercise and have any interest at all about improving your fitness then I highly recommend this episode. In my opinion, it’s an absolute must listen.

The key aspect of my health, fitness and happiness is consistency. This is only possible because I do all that I can to ensure that my body and mind are available to train, that I’m able to turn up every day and taking on *with quality* what is put in front of me. This is accomplished via appropriate intensity distribution, nutrition, and recovery.

Below are the many takeaway quotes from a Simon Ward podcast with Stephen Seiler, Polarised Training and much, much more.

• Seiler introduced the term ‘Polarlised Training’ after seeing the clear and measurable training habits of elite rowers and cross-country skiers who had a lot of training (80% of sessions) below LT1 (Lactate Threshold 1) and some training above LT2 (Lactate Threshold 2). These are sports where the racing performances are at or near VO2max (maximal oxygen uptake) and between 6 to 30 minutes in duration.

• Research is showing that elite athletes are distributing some of their high intensity work near LT2, not just above. The ratios might be 80% of sessions below LT1/10% tempo/10% intervals, or 80/12/8, or 80/15/5. What is consistent in high performance sports (i.e. rowing, distance running, cycling, cross-county skiing, swimming) is that 80% of all sessions (90% of time in zone) are done below LT1.

Note: I personally prefer using time spent in zones (vs. number of sessions) to determine intensity distribution. It’s much too easy to do a session incorrectly and end up doing low intensity too hard, and hard intensity too easy. Most training software allows us to objectively view time in zones quite easily.

• 🌟 The one key thing when it comes to training intensity distribution is the golden ratio between the adaptive signal created by the training and the systemic stress that also occurs. We’re trying to manage this ratio as effectively as possible. We want to maximise the signal for positive adaptations and do it at sustainable level of systemic stress. Training stresses the body. 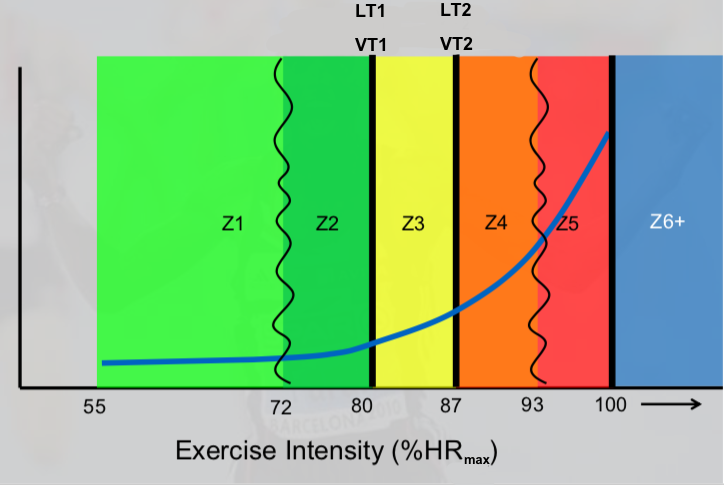 • The delay in parasympathetic recovery is equally slower for all training above LT1 regardless of whether the session is threshold/tempo or HIT, but below LT1 athletes recovery very quickly as shown by a return or overshoot of HRV within 5-10 minutes of finishing the session.

• There is nothing fundamentally wrong with threshold intensity training for individual sessions. But what becomes a problem is a training intensity distribution that is too monotone, that induces fairly significant training stress responses too often. Regarding sustainability, high performance athletes have understood that consistent training, in order to maximise the adaptive signal, it’s important to “stay under the radar” on a majority of training days otherwise injury, stagnation, and over-reaching occur. If intensity and duration are used in the training program appropriately then the athletes can manipulate their overall training load so that on some days they stay below the stress radar while also generating the cellular signal, and on other days they activate the big stress response.

• Training distribution is extremely relevant for recreational athletes who train 10-15 hours per week, perhaps even more relevant than for elite athletes. If you’re in the 8-15 hours per week training window, particularly 8-10 hours, it’s possible to train “pretty hard” every day and survive. There’s a very clear tendency that when we’re stressed for time we feel compelled to use intensity for all its worth, but it’s a blackhole that will give a nice response for 6-8 weeks and then stagnation occurs. It’s very predictable.

• Convincing age-group athletes to slow down, thereby having the energy to do the hard sessions in a high-quality way, allows them to respond really well.

• People think that if they’re not training hard all they are doing is filling time until the next hard session. That is just wrong! We have enough training data to say that’s a misunderstanding of the training process. Those low intensity sessions are developmental, they do stimulate adaptations.

• The only way to develop durability (against heart rate drift) and create a solid base is via the long-easy training. Athletes who have the discipline to distribute training appropriately can go harder, longer when the hard sessions are called for.

• Threshold workouts are hard by function of the duration. Hard is a function of intensity x duration. Intensity in itself is a unidimensional construct: it has no real meaning until a time frame is put on it. Durability of low intensity is your ability to hold the sub-threshold intensity longer. If you go long enough and deplete glycogen and slow-twitch fibres the body will recruit more high-twitch fibres and the heart rate increases (cardiac drift), and there will be stress responses that look like the session is being done at a much higher intensity. (An 8-9 hour ride at 60-65% of maximal heart rate [HRmax] for cycling is a hard workout even tho it’s a low relative intensity. Likewise for running and swimming relative to HRmax for those sports.)

• 🌟 There is no such thing as a steady state in the human body. Eventually all intensities become hard if you go long enough.

• Dr. Seiler is not opposed to carefully delineating more zones [than three] if it promotes good communication between coach and athlete. But for most people, three zones, done really well, solves a lot of problems. Simple is not always better, but many people are overly complicating things. Let’s get really good at some simple things before adding layers of complexity. Get to know your body really well and understand the nuances.

• In reference to Seiler’s Hierarchy of Training: volume & frequency, some high intensity, and attention to training distribution are the three foundations. There’s no point in getting too focused on things like eight training zones if the athlete doesn’t fuel properly, or doesn’t get enough sleep, and doesn’t recovery adequately.

• It’s not sexy, but most of the work is just getting out there to train regularly [at low intensity]. Get the basic, mundane things right then build on some details.

• The basic daily grind is baking the cake; it’s building the resources. High intensity and race sessions are eating the cake; it’s stressing the body. You can’t eat more than you make. There is a price to pay, a stress to recover from, in training, [especially any training over LT1].

• YouTube videos are misleading because they show the great moves as if they happened overnight. What you don’t see is the basics being practiced over and over and over again for years.

• The point at which LT1 occurs is fuzzy because it’s time dependant. If you go long enough then heart rate drifts up, you degrade physiologically, and the internal cost increases relative to the external work. In triathlon, you’re only fresh in the first 20 minutes of a race. After that you’re slowly deteriorating and you’re trying to manage that over time by trying to find the balance to hold the highest intensity over time. That’s where it’s really important to be sensitive in your body to the first lactate turn-point. The first training zone is the most important because it’s the diesel motor that allows work over a long time, above LT1 the clock is ticking.

• When exercising in the heat the body has redistribute blood flow, diverting blood from working muscles to the skin in order to use the radiator effect to get rid of heat, which means that there’s less oxygen delivery to the musculature and the body has to slow down a little bit in order to come into balance. The hotter it is the more the body is being torn between two goals: 1) lots of blood to the muscle; 2) getting rid of heat.

• Power and pace are a result of the physiology, they are dictated by the physiology. If your heart rate is drifting up then your body is under stress.

It’s a balance of information. If you get those calibrated correctly then you have a good toolbox for monitoring. If you just use one then you’re going to make mistakes.

• Just doing the polarised training method isn’t good enough. If the athlete is missing training days then a solid foundation for higher intensity work isn’t being developed or maintained. Don’t just focus on the single workouts. It’s important to view the bigger perspective: be sure to achieve total training time [at low intensity] as the primary building block. The effect of any one session within 250 sessions is almost unrecognisable, but when putting it all together it determines success. Over time, if you stay healthy and motivated, you will accumulate more quality training and have better outcomes.